SOMEONE on here sure has been falling behind on his promise to archive a few more of his Miiverse posts on LJ and DW every-- oh wait, that someone is me, isn't it... :P

If I'd been on schedule, this entry would've been posted between June 17 and 23, 2018. It's kind of hard to motivate myself to post these sometimes because I have to write the DW version of the entry, have that automatically be cross-posted to LJ, and then edit the LJ version to use the LJ copies of all the images (community icons, handwritten posts, tiny icons like the one for Yeahs, etc.)...

Hopefully it'll become easier now, though... Recently I made a little program where I can write the LJ and DW versions of an entry simultaneously, where I type into one text box and the program copies it into separate text boxes for LJ and DW; it copies text into both text boxes until it gets to a "▌" character (meaning everything until the next "▐" or "█" should be on LJ only), a "▐" character (meaning everything until the next "▌" or "█" should be on DW only), or a "█" character (meaning everything until the next "▌" or "▐" should be on both). For instance, the last word in this sentence is different on here from what it is on DreamWidth. The use of left/right half block characters makes sense to me because I typically put LJ-related tabs on the left side of my screen and DW-related tabs on the right so I can tell them apart. :)

(Though this one still took a while. Maybe I need to modify my program to add shortcuts specifically to make these Miiverse backup posts easier by making it so that if I type ☺Y☻ or ☺SSB4☻ or ☺:O☻, for instance, it'll be replaced with the Yeahs icon or the SSB4 community icon or my Mii's shocked expression, complete with it being the LJ version on LJ and the DW version on DW?)

(In addition to my first Miiverse post in over a month, this was also my first one in the Super Smash Bros. series community. The backup Nintendo sent me incorrectly says these are in the Super Smash Bros. for 3DS/Wii U community, but that was the community created after the game was released, which I never posted in because by then I'd already become sick of Miiverse; the SSB series community was created after the Villager, Mega Man, and Wii Fit Trainer reveals at E3 and existed until the game was released.

Two more things to point out: This had the second-most comments of any of my posts on Miiverse - surpassed only by that surprisingly popular "unlikely vine, likely vine" one - and was my first Miiverse post to end up having more comments than Yeahs.) 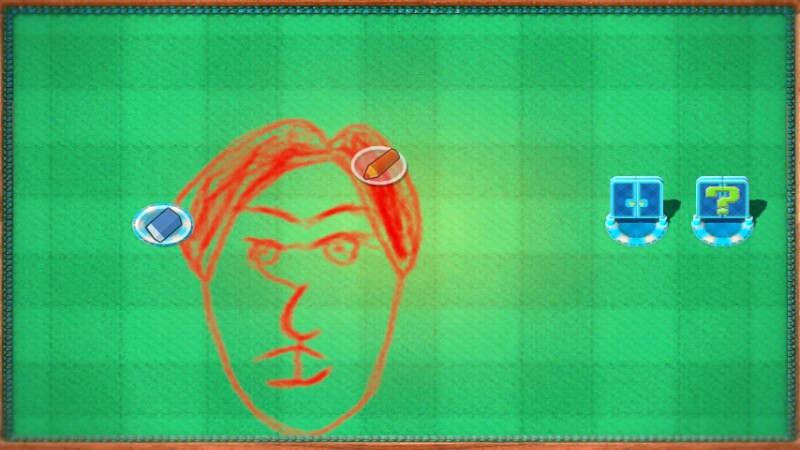 Apparently there's a trend of drawing stuff in Fruit Cart. At first I thought "pointless but might as well try it" but when I started I thought "It's harder than it looks…so THAT'S why they do it!"

(That's supposed to be my Mii. I don't know why I merely said that there was a trend of people drawing "stuff" in Yoshi's Fruit Cart if the only pictures I remember anyone drawing in that game were of their Miis. I don't think my drawing turned out well... I found it hard enough to draw my Mii as it was, and then to try and do so with a single connected line...)

Takamaru's Ninja Castle
Whenever I have to throw stars rapidly, I end up doing so to the rhythm of the music :)

(As it turns out, this was my last post in the Nintendo Land community for whatever reason. I still haven't gotten around to 100% completing the game. Which attractions [plus the plaza] did I post about the most?

Note that I did play the last three on the list, but not as often because they are multiplayer-only - and in multiplayer modes there's less opportunities to take a break to make Miiverse posts.)

Finally beat the Mini Mountaineer challenge! But if getting a gold medal for it is required to unlock anything, it still might as well be "Prove the Riemann hypothesis without touching the ground" :(

This was probably also my most obscure joke throughout my entire history on Miiverse, too... if you don't know what the Riemann hypothesis is, all you need to know to understand my joke is that it's a certain mathy thing that is probably true, but so difficult to definitively prove that so far no one has been able to do so. I guess I was hoping that people would at least know that, but I was wrong. This is about the only reason I know what it is, in fact.

Back to NSMBU... I still don't think I've 100% completed all of the challenges in Challenge Mode - I'm pretty sure there's still some I haven't beaten, with gold medals or otherwise.

Which New Super Mario Bros. U levels did I post about the most?

This excludes New Super Luigi U levels and cases where I can't deduce exactly which level I was playing.)
Collapse